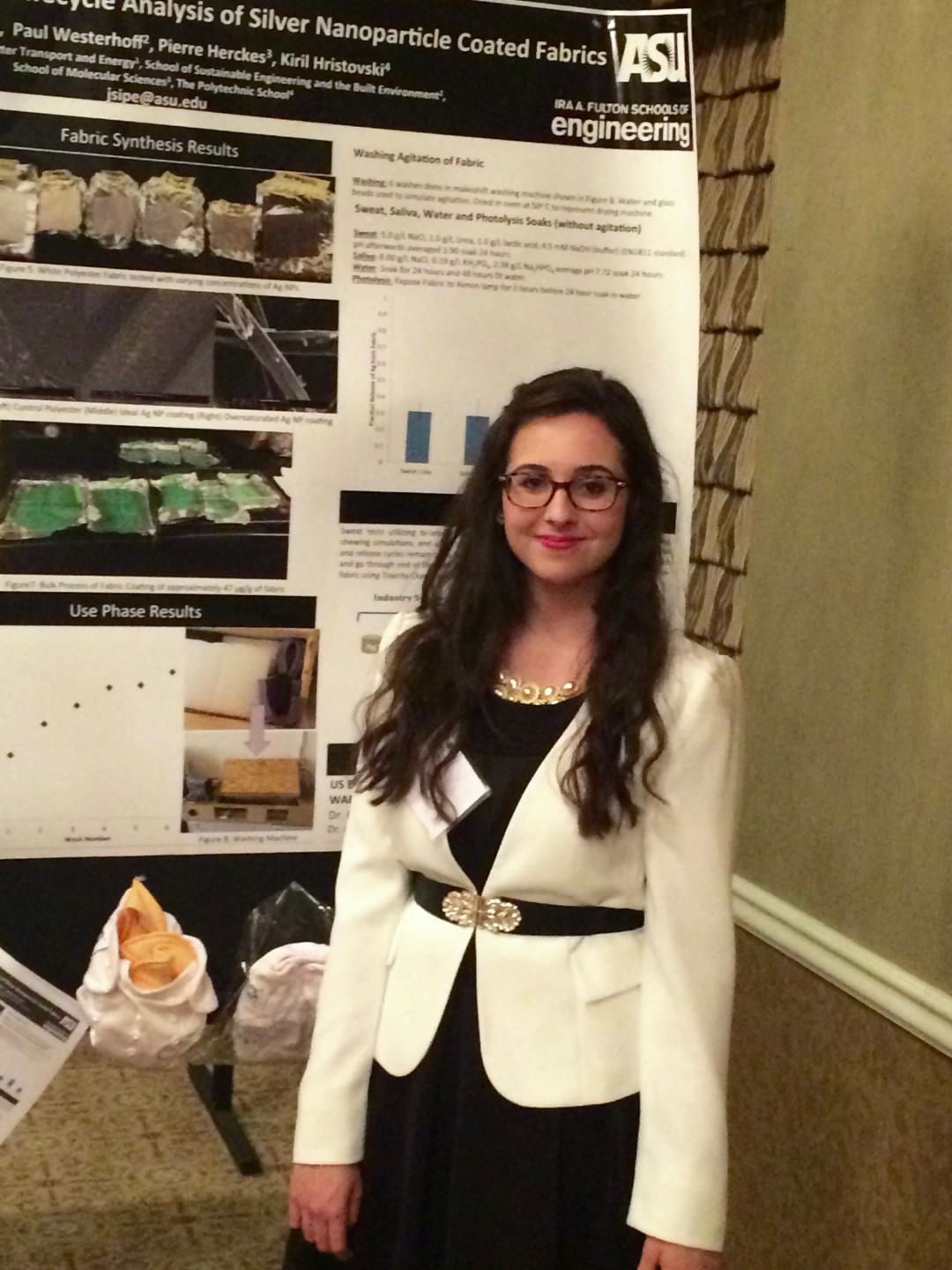 Chemical engineer and FURI researcher Joana Sipe attended the Sustainable Nanotechnology Organization (SNO) Annual Conference in Portland, Oregon with the help of the FURI Travel Grant. She presented her research poster titled, “Synthesis and Lifecycle Analysis of Layer-by-Layer Silver Nanoparticle Coated Fabrics,” which she has been working on under the mentorship of Dr. Paul Westerhoff. Joana answered a few questions about her trip.

The conference was centered upon the development of sustainable nanotechnology, which is the use of particles 10-9 m in diameter with special physical properties than their larger counterparts in order to progress improvements in the environment, society, and human health.

What motivated you to present at this conference?

I wanted to go to my first conference before I graduated from my undergraduate degree and to present my poster at a conference.

What were some of the presentations you attended?

Dr. Mihail Roco gave the first group presentation of the conference on the history and future of nanoparticles. In his words “By 2020, nanotech promises to become primary platform for investments and venture funds in science and technology.” He said that there was a 30-year evolving focus on nanoparticles that could be sectioned into three 10-year groups. The first group was from 2000-2010 focused on nanocomponent basics in which their structures, processes, and various new phenomena were researched especially in their synthesis. 2010-2020’s focus group was considered to be system integration of nano in which complex integration for direct technology, such as my research on silver coated nanofabrics, would be tested for their impact on the environment, society and human health. The future of nanotechnology, from 2020-2030 in his opinion will be on technology divergence of nano, which will focus on the breakthroughs in nanostructure system architectures and how to modify nanoparticles for specific functions.

One of the best presentations of the conference was centered on the LC Nano group and their impact in museums throughout the country and expanded into Nanodays. This meeting was for members of the LC Nano group and headed by Dr. Ira Bennett. In these exhibitions they explain why nano is small and different to children and how studying these tiny particles can lead to new technologies in the future. In the meeting we brainstormed about new developments in the LC Nano group and how to convert those projects into new stations in the exhibit. One of the most promising was the focus on titanium dioxide nanoparticles, since titanium dioxide nanoparticles are used in wide arrays of applications such as whiteners in paint to the smooth consistency in an m&m chocolate candy.

Best part of the conference?

The best part of the conference was learning about all the new advancements in nanotechnology and meeting so many people in the field. I also enjoyed the poster session and being able to communicate my research to experts in the field.

Has your involvement with this conference influenced your research plans?

At this conference I was able to hear a few presentations from the CEINT program and talk to some of Dr. Mark Wiesner’s students. Because of this opportunity I decided to apply to Duke University for a PhD program to work with Dr. Wiesner and have been accepted into the program this coming fall.

Is there anything you wish you knew prior to the conference?

The presentations were grouped into “subsections”, such as air and water or health, with three subsections running at a time. I wish I had known the scheduled talks in each section before the conference so that I had been able to organize the talks in between rooms and be more aware of the range of presentation topics.

Any suggestions for other students regarding conferences?

I would suggest other students, especially those involved with FURI, go to at least one conference in your undergraduate career. It can help you learn about new topics you might want to pursue as a job in industry or in graduate school and help you make a lot of connections with people in the field you are interested in.

Going to a conference? Have research-related travel needs? Apply for the Undergraduate Research Travel Grant!