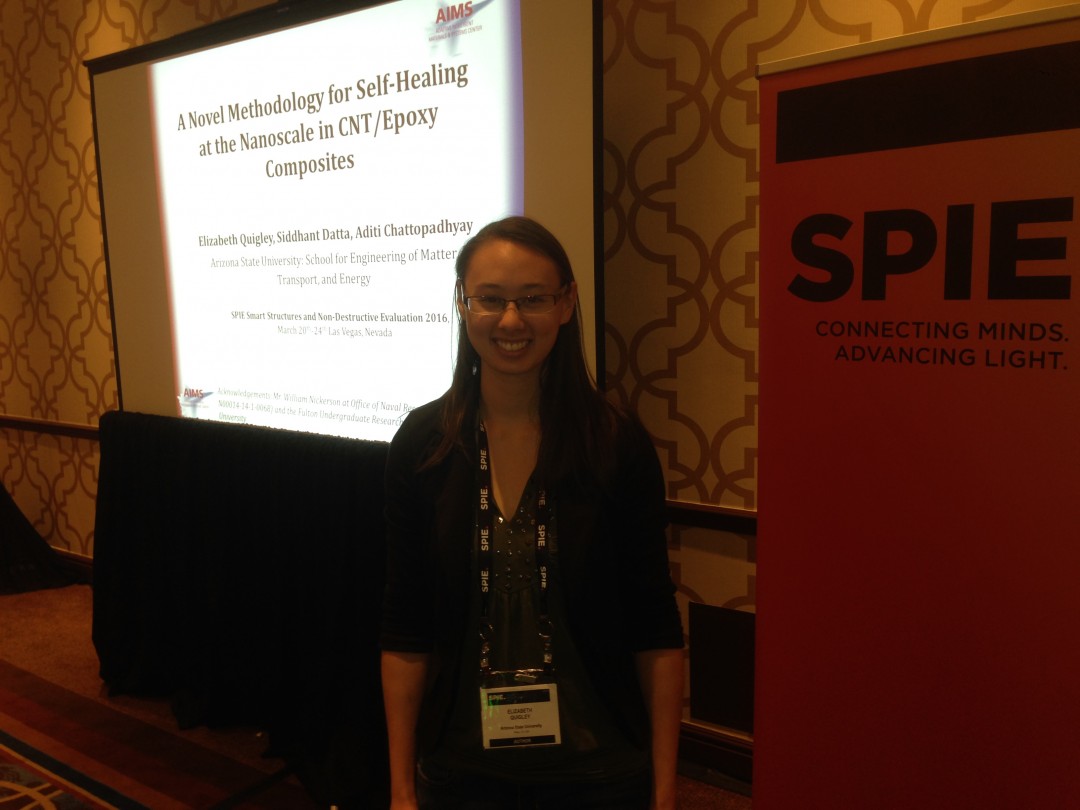 Elizabeth Quigley is a materials science and engineering major as well as Barrett Honors student who has been conducting research under the guidance of Dr. Aditi Chattopadhyay. Last month in Las Vegas, she presented her research titled, “A Novel Methodology for Self-Healing at the Nanoscale in Carbon Nanotube/Epoxy Composites” at the SPIE Smart Structures and Non-Destructive Evaluation conference. After the conference, Elizabeth took time to answer some questions about her experience.

The conference brought together researchers who were investigating smart materials- i.e. materials that could sense damage, detect changes in their surrounding environment, produce energy through external stimuli, etc.- or methods to determine the health of a structure without damaging it.

What motivated you to present at this conference?

I intend to turn my research into a journal paper and presenting my research at a conference was a step towards reaching that goal. I also wanted to see what current research was going on in order to start generating some ideas for future graduate school research endeavors.

What were some of the presentations you attended?

There were so many fascinating ones! One of my favorites was about a biodegradable robot that could take organic waste such as oil, process it into electrical energy to propel the robot, and then eventually degrade into the environment after a few months. It uses a microbial fuel cell that closely resembles an actual stomach in the sense that it can take matter from the environment – such as oil, animal waste, or plant matter – and the microbes in the fuel cell break down these organic materials into its chemical components, which are then used to create an ion gradient that generates electrical power. However, this is preliminary research since the energy generated is not enough to power more than a small-fish sized robot, but the applications are extremely impactful. They plan on developing these robots to clean up litter and water pollution in order to improve the environment.

There was also another presentation in which they were trying to develop an inkjet printer that could be used to print electronic components for fast prototyping. The idea was to have a liquid filled with conductive particles that could be printed in a user-defined pattern with a printer that is accessible to everyone.

Best part of the conference?

There were so many interesting presentations and research topics! I liked how each presentation was followed with an opportunity to ask questions which I definitely took advantage of and I also liked seeing people gathering together to discuss the presentations they saw. It was an atmosphere of creativity and innovation that I hadn’t seen before.

Has your involvement with this conference influenced your research plans?

This conference really showed me the importance of being a good speaker. A lot of the presentations I was excited about were by those who could communicate well the captivating aspects of their research and the significance of the applications. It confirmed my interests in bio-inspired materials since those were the sessions I attended the most and I loved seeing how some of the projects had very immediate applications because it showed me that research really can have an impact.

Is there anything you wish you knew prior to the conference?

I wish I knew how conferences worked in general. I remember feeling really out of place and lost the first day because everyone seemed to know what to do or where to go. My professor was not able to come until the second day so it was a huge learning leap to figure everything out.

Any suggestions for other students regarding conferences?

Go to presentations that have interesting titles to you because you’re more likely to pay attention and actually learn something than if you just went to the ones your professor went to. Also, the presentations in the big rooms are worth going to since they are often topics that interest a lot of people. One more thing, these are great places to network so don’t be afraid to ask your professor or someone else to introduce you.

With Elizabeth’s advice and some help from the Undergraduate Research Travel Grant, anyone can have a successful conference experience!